I am fortunate to live within driving distance of the Canadian-American border. This line, partially defined by the St. Lawrence River, is where much of the war of 1812 was fought. For a summer birthday gift (moving my November birth to a more accommodating outdoor celebration), my wife took me on a cruise of the river and a walk around Gananoque. 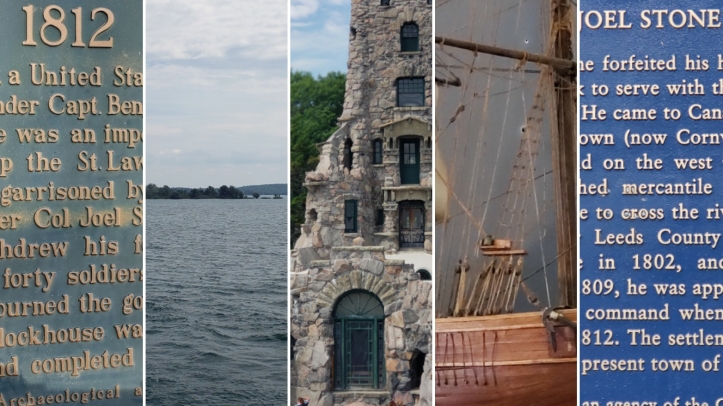 Early in the War of 1812, which is when my novel takes place, American riflemen raided Gananoque, a small town run by Joel Stone. Stone was a loyalist even during the revolutionary war. After the revolution he went north and was given land by the crown, gaining prominence in the county as militia colonel, customs collector, and justice of the local court. He also developed mills, shops, a farm, distillery, and inn.

The man was busy and successful, but when he overstepped his recruitment to the militia, he had little support from the locals. When Captain Forsyth led his riflemen in the raid, the twelve militia guards surrendered and the others ran away. These Americans were little more than pirates, taking to plundering and burning Stone’s property. They even shot his wife, though I think by accident, and I think she was only wounded.

There are several important locations I hope to visit along the border, each with historical importance in the war, some which may be featured in my book. Reading about them is exciting, but getting a chance to put my feet on the same ground brings me closer to my own words and will hopefully enhance my experience as well as my readers.

An American working in Canada with a Mexican wife and daughter. Along with learning Chinese, I think that makes me multicultural! My day job is running a security company. I have a passion for film, music, and books, all of which I hope to instill in my daughter. Follow my chronicles as a first-time novelist on my blog: https://mattcsully.com